Excerpt: The Summer He Came Home 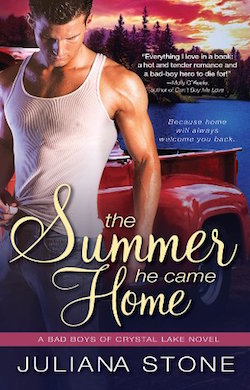 Cain cut the power and turned to her, his eyes glittering-electric. He leaned against the edge of the desk, legs spread, and Maggie blushed, realizing she stood between them. She moved, wanting to step back, but his arm shot out and his hand–those long warm fingers–closed along her forearm.

With that one word, underlined by a huskiness that tugged at her insides, Maggie froze. All sorts of feelings rushed through her, physical and emotional. Hot and cold. Fear and anticipation. Crazy and even crazier thoughts twirled through her mind. Images of tongues and skin and heat and those damn eyes.

An ached formed in her gut and spread, infiltrating every single cell in her body until she trembled.

She stared at him in silence, but his gaze was too intense and she lowered her eyes, watched his pulse at the base of his neck instead. It seemed safer somehow.

The air was thick like molasses. It had to be–she couldn’t breathe.

“What do you want to know, Maggie.” His voice was like butter, thick and silky at the same time. She shuddered as his fingers slid along her arm to pull her in closer.

Danger lurked in the air, encircling her in an embrace she couldn’t escape-maybe she didn’t want to-but that would be crazy, wouldn’t it?

They were inches apart and she inhaled the rich aroma that was all him. Wrong thing to do. It was incredibly male, tangy, full of spice, and it got her head spinning the way one too many glasses of wine did.

“Ask me anything,” he challenged. “I’ve nothing to hide.”

Her mouth was so dry, Maggie didn’t know if she could speak. She cleared her throat, very much aware of the fingers that caressed the delicate area between her palm and her wrist. Each time his forefinger rubbed there, a little piece of her liquefied, melted and burned. She should push away and get as far from Cain Black as she could.

What was she doing? This road she was on was dangerous, she knew this, but Maggie felt helpless to get off.

“I don’t…” she shook her head, not knowing what to say. On one hand she was mortified that he’d found her online ogling pictures of him like a freaking teenager. On the other, his abrupt dismissal the other night stung, more than she wanted to admit.

Then there was Michael.

She was confused and felt impotent with her inability to act. She’d kept her feelings locked away for so long now that it was foreign, this deluge of emotion. She was afraid to follow her wants and needs. Those kinds of things led to a dark place.

Her head shot up as a sliver of clarity cut through the fog. “What do you want?”

Cain remained silent but something changed. She felt it. His pulse was faster and his breaths fell in shorter, quicker spurts. Danger solidified and wrapped itself around her tight, as she struggled to make sense of her emotions and get words out of her mouth.

“You said I could ask you anything,” she started in a rush. “Why are you,” she shook her head, felt the burn in her gut surge as a wave of anger thrust through her. “Why are you doing this?”

“This?” he asked silkily, dangerously. His gaze swept along her arm, from where his hand held her still, up to her chest where he lingered a little too long. She felt her nipples harden, felt them strain against the tight confines of her t-shirt. A shiver rolled over her body, and she exhaled shakily as he slowly lifted his eyes and gazed directly into hers.

He moved again and tugged on her gently until she was against him, tight between his legs with her hands upon his chest.

At that moment Maggie was aware of many things. The length of his lashes as he stared down at her. The golden flecks that shimmered behind the dark chocolate of his eyes. The accelerated beat of his heart beneath her fingers.

The thick bulge that filled his jeans and burned against her hip.

“Why am I doing this?” He asked once more, his voice husky as he lowered his head. His warm breath tickled across her flesh as ripples of desire rolled through her trembling form.

Maggie closed her eyes. She stopped breathing. And maybe the world stopped spinning because it felt like the ground had shifted beneath her and she was falling.

His hands claimed her hips and he turned her to so that she was flush against him. So that every inch of her from the waist down was pressed into his body.

So that the place between her thighs, that hot, moist part of her, rubbed against him in a way that ached.

A groan fell from between his lips and she shuddered as his mouth skated across her neck, to settle beneath her earlobe. He nuzzled her there and everything inside Maggie erupted in a red-hot wave of need that was so intense her legs surely would have buckled, if Cain’s strong grip hadn’t held her firm.

His hands slid upward until he cupped her head and fingers slid along her jaw in a smooth motion. He forced her to look up at him once more. “Ask me again, what I want.” He said hoarsely.

Maggie closed her eyes. This was so wrong. To feel this way about a man like Cain Black. He was way out of her league. “What do you want?” she whispered.

His breath was on her face once more, caressing her skin like small whispers of magic. The ache inside was so intense it was painful.

God, the way he said her name.

“I,” he kissed her cheek and her legs did give out, but his hands were there, and she clung to him. “Want,” his mouth slid to her temple where his tongue darted out to taste her there. He nibbled his way down to her mouth and hovered above her lips, with only a whisper of heat between them.

She opened her mouth, felt the anticipation that tingled inside her body and was weak from the weight of it. She was coming apart and the man had barely touched her.

It had been so long since she’d felt this way. On the cusp of desire and rank with its effects.

“Open your eyes Maggie.” His voice was so low, she barely heard him. But the feel of his hands on her face was urgent, and his muscles bunched against her palms as he shifted beneath her.

She opened her eyes and ate the groan that sat at the back of her throat. Cain stared down at her like he was starving. Like he needed her to breathe.

His right hand slid into her hair and his lips brushed the softness of hers, his eyes never left hers as he whispered against her mouth.

Return to The Summer He Came Home

“The start to Stone’s new series is realistic and edgy, with a largeworld perspective as well as warm characters and an appealing small-town feeling. And bad-boy Cain will appeal to new and veteran romance readers, including those who enjoy novels by Cathie Linz and Susan Elizabeth Phillips.”

“Everything I love in a book: A hot and tender romance and a bad-boy hero to die for!”

“The first book in the Bad Boys of Chrystal Lake it is a brilliant start.”