He's All That excerpt 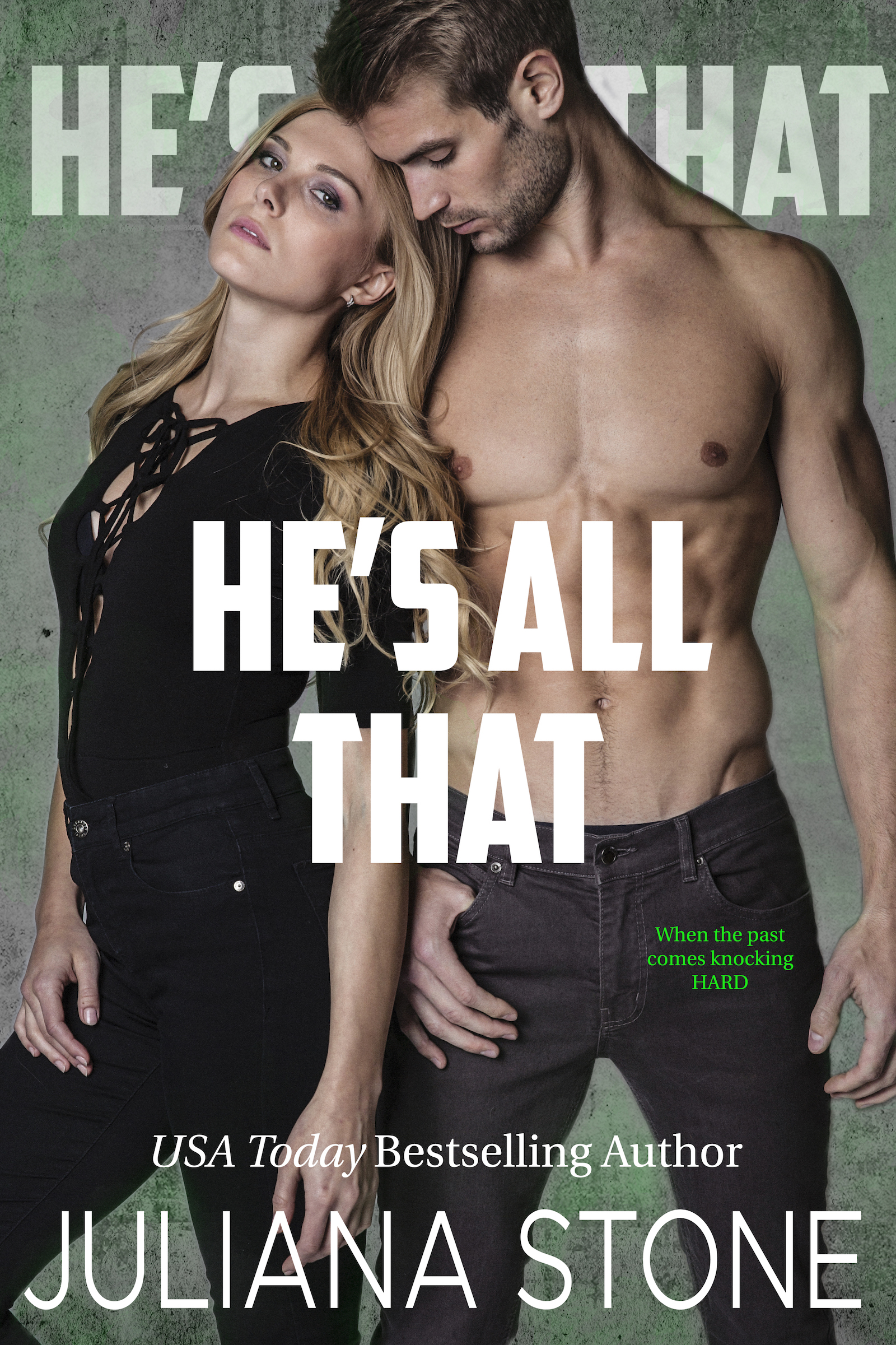 The fact that I’d spoiled New Year’s Eve didn’t surprise one single soul. The fact that every second of it was documented by a rabid pack of paparazzi didn’t surprise me. They’d been on my ass the moment I left my hotel for the bar, and after that, my night had pretty much gone in the toilet.

It’s never a question of if I’d screw up, but when I’d screw up. I know it and they know it. They’re always in my face, yelling and jostling, flashing their cameras like strobe lights on steroids. They don’t give a crap about me, and the more upset I was, the better. Even when my heart was bleeding pain faster than a drunk sucking back a bottle of JD. Even then.

Welcome to my life.

The paps swarm, they push, they puncheach other, looking for that one photo to make their week or month or even their year. And I’d given it to them.Of courseI had. Echo Mansfield never fails to deliver. Heck, up until now, I believed that good press is good, but bad press is gold. This time, it was bad, and I didn’t stick around for the fireworks. This time, I’d cut and run because, even for me, the night had gone way off the rails.

Which is why I found myself in the middle of a snowstorm, out in the Catskills, trying to force open a door to my dad’s cabin that was frozen stuck.

It was four in the morning. I had one bag of clothes with me, and hell if I knew it was enough. I’d packed so fast, I was pretty sure it wasn’t. And now this stupid door. I swore and looked over my shoulder. I would have called the car service to come back and get me, but my cell was dead, which meant I was pretty much screwed. And since I’d slipped past my security guys to get here, I didn’t have them to bail me out of another one of my bad choices.

I hadn’t bothered to change and wished I had. I wore a small leather jacket, a barely there black top, and a skirt that just covered my ass. When I say barely there, I mean the top was sparkly and cropped and showed a generous amount of under boob. As for the skirt? At least I was wearing underwear.

“Shit.” I looked around, shivering, tired, and miserable. Could this night get any worse?

The main house of the bed-and-breakfast was in darkness and most likely locked up tighter than Fort Knox. My dad owned the place, something he bought on a whim years ago when he’d come for a weekend with one of his girlfriends, and the cabin I stood in front of was his own private space. Not many people knew about it, which is why it was my go-to when things got rough. I could hide out for a week or so until the shit storm I’d created died down, and then go home.

Tears spiked the corners of my eyes, and I scrubbed at my face. I was angry (at myself) and upset (with the world). Would Harmony forgive me? I sniffled. It wasn’t as if I’d actually screwed my sister’s boyfriend. I was just looking for a distraction, something to take my mind off the fact that my boyfriend, Aiden, hadscrewed someone else. I was looking for payback, and her guy, Douchebag Drake, was the answer.

If anything, I’d done Harmony a favor because Drake was totally down for some skin on skin. Hell, he’d almost gotten his wish too. I shuddered at the thought of his hands pawing up my skirt. His mouth on mine. If not for one very well-placed knee to his junk, the night would have turned out differently. We would have had sex. And not because I wanted it.

I rubbed my hand across my forehead. How did I always land in the middle of a crap-covered landmine? Harmony had walked in on me and her asshole boyfriend, and we’d gotten into the biggest catfight ever. I touched my neck, still raw from Harmony’s claws, and winced. Lucky for me, she hadn’t gouged my eyes out. The girl could throw down like no one’s business. I’d be surprised if the pics hadn’t already hit TMZor the Daily Mail.

A brisk wind ran along the porch and rattled my bones, bringing with it a wave of ice pellets. Great. Freezing rain. This is where I would die. Alone. The black sheep of the Mansfield family. A half-dressed frozen popsicle. A drunken dumbass who’d hurt her sister so badly, Harmony would probably never talk to me again.

Or come to my funeral.

Geez. Fucking. Louise. I could tap my toe and hum a song to go along with the pity party I was having. This wasn’t me. This isn’t me.

I kicked the door and swore a mean streak as pain radiated up my leg. “Fuck.” I shouted, slamming my fist against the damn thing. “Fuck, fuck, fuck, fuck, fuck.” Breathing hard, I rested my forehead against it. What the hell was I going to do? The other cabins were dark, with no vehicles that I could see. I couldn’t remember if there were any more homes nearby. Maybe? A couple of miles away? I tried not to cry as another shudder racked my body. How in hell was I supposed to walk one hundred feet in this snow wearing the ridiculous shoes that had cost me a fortune?

“You got something against that door?”

My head whipped around so fast, I got dizzy. A man stood on the porch of a cabin up the hill. It was about twenty feet away, and I couldn’t see his features clearly, but certain things stood out.

Deep, husky voice. An accent I couldn’t quite place, as if the dude was from everywhere. Tall. Broad shoulders. Long muscular legs. His bare chest glistened from the muted lighting that spilled from inside his cabin, and his loose pants hung low on his hips.

Relief flooded me. I wouldn’t die. I would be saved and warm and the world was not so bad after all. “I…” My tongue was fuzzy, and it took a bit to get the words out. “I can’t get in. The door’s stuck.”

“I don’t want to sound like an asshole, but this is private property. Do you have the key?”

Okay. My knight in shining armour wasn’t exactly chivalrous. “Of course I have the key. I’m not an idiot. I’ve got it unlocked. It’s frozen.” Annoyed, I glared at him.

“Where did I…” I took two steps forward and damn near landed on my ass when my heels hit a patch of ice. If I hadn’t been so busy trying not to fall, I might have heard him swear like a trucker. I might have known that he’d recognized me. “What does it matter to you where I got the key?”

“Answer the question, sweetheart.” The way he said sweetheart was the exact opposite of how it should be said. It came across as an insult. It rang a bell, and my heart took off like a rocket. This couldn’t be happening. No fucking way could this be happening.

He took a step forward, and suddenly, the shadows disappeared, revealing a face I hadn’t seen in years. Wait. Hold on. We’d had a moment three years ago, but it didn’t count. Still, it was face I knew well. Intense dark eyes. High cheekbones. Chiseled chin. Sensual mouth. My eyes dropped to his impressive body. To the tribal tattoo on his shoulder. To the one snaking across his lower abdomen. Like, way low. To the thin line of dark hair that disappeared beneath his pants. Huh. Some things never changed. If anything, the man was more gorgeous than I remembered, and that kind of sucked.

My stepbrother. No. That would be wrong. Our parents divorced about six months after they got hitched. He was my ex-stepbrother. He was also the guy who’d taken my virginity along with my heart when I was sixteen, and I hated him more than anyone on the planet.

He glared at me from across the way, his anger like a slap to the face. I guess he felt the same.

Yeah. Welcome to my life.

Return to He’s All That