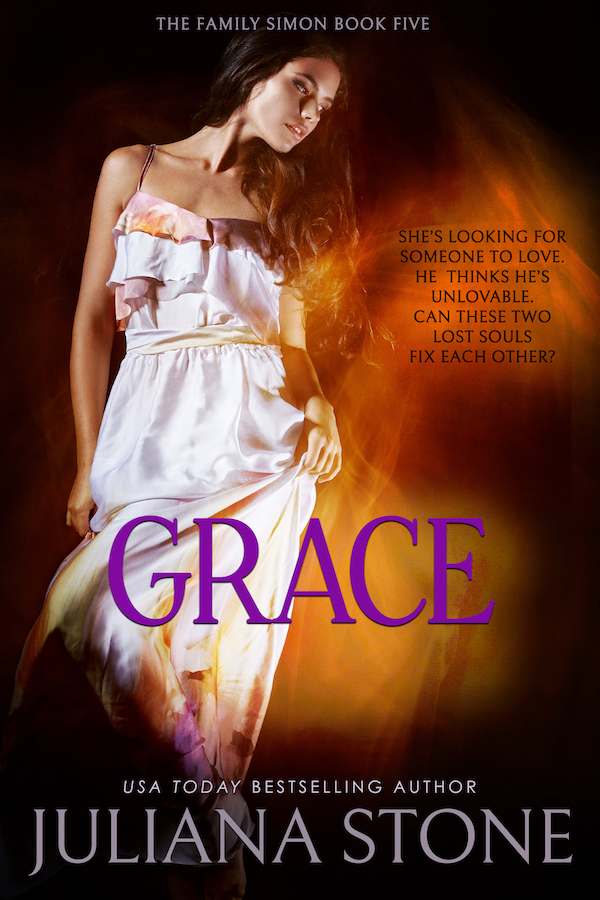 “Last time I saw you, you had blue hair.”

Grace Simon should have recognized the deep husky timbre of the voice that spoke from behind her. Heck, she’d dreamt about it off and on for the last two years. But she was already onto her third cocktail, and in her defense the music was loud. So instead she grimaced and rolled her eyes at her friend Nicola. She didn’t bother to turn around and see who was behind her. She didn’t care. She’d been fending off men for over an hour and was fed up.

“Ever?” He was closer now. Annoying.

Grace drained the last bit of her drink. “Ever,” she repeated.

“That’s some kind of record considering it wasn’t a pickup line but the full-on truth.”

Her pal Nicola elbowed her and mouthed, ‘hot’. Whatever. Grace was done with men. DONE. She should have known better than to meet Nicola here. The place was a meat market.

She pushed back from the bar and turned around ready to let the guy have it. But the words stalled at the back of her throat and she went still as her gaze moved up the impressive physique, (seriously jeans and a plain white T-shirt had no right to look this good) until they rested on a face that she’d fantasized about more times than she could count. Matt Hawkins.

“Hey Grace,” he said, a slow smile curving his lips. “Your brother told me you were in Nashville. I’ll have to let him know I ran into you.”

Heart beating rapidly, she cleared her throat but all she could muster was, “Ah…hey.” Lame. So. Very. Lame.

“Babe, I hate country music can’t we go somewhere else?” A blue-eyed blonde slid up against Matt—a blue-eyed blonde with considerable assets. Grace liked to think that Double D’s were overrated, but this girl kind of trampled all over that argument.

Matt held Grace’s gaze for a heartbeat longer and she hoped like hell the deep flush that heated her skin wasn’t visible in the darkened corner of the bar.

“Matt?” The blonde said, eyes narrowed as she turned to Grace.

“I’m Grace,” she blurted, holding out her hand like an idiot. The woman tilted her head and nodded, but didn’t reach for Grace’s hand. “Candy.”

“I…uh…so what are you doing here? I mean, not here at this bar, but like, here in…Nashville. I mean, it’s so weird that we ran into each other.” Stop talking. “Here, in uh, Nashville.”

“Oh.” Again, could she not come up with more than a one-word response?

He slid his arm around the blonde. “It was nice seeing you again, Grace.” Another heartbeat passed. And that tumbling feeling in her stomach intensified. “I’ll let you get back to your friend.”

She didn’t say another word because she couldn’t, and with a small nod he turned and melted into the crowd, the busty woman clinging to him. Grace blew out a hot breath and reached for her drink, swearing when she scooped up an empty glass.

“Who the hell was that?” Nicola asked, as she yanked on Grace’s arm.

“That was Matt,” Grace whispered.

The guy who’d kissed her like no tomorrow beneath a snow filled sky. It didn’t matter that Grace had been the one to initiate the kiss. Or that she’d ignored his protests and had practically assaulted him. It didn’t even matter that when he’d eventually managed to pull away from her, he’d told her that it was all wrong.

Said that he wasn’t the kind of guy she should be kissing in the first place. She’d protested but then he’d said he wasn’t interested.

Matt Hawkins had taken a step back and that’s when she’d glimpsed something in his eyes that told her otherwise. She’d called bullshit but he’d walked away all the same. Without another word or a look…without nothing.

That had stung. It had stung for a long time because Matt Hawkins had been wrong. So damn wrong. His kiss had rocked her world and she was pretty damn sure she’d done a little rocking of her own.

Grace accepted tequila from Nicola and downed the shot, eyes moving over the crowd until they found Matt and the blonde. He was chatting with another man, a guy who looked vaguely familiar, but it was the blonde woman who had Grace’s attention. She was pressed against Matt, her curves melted into his hard frame, and the red-hot jealousy that rolled through Grace left her breathless.

“Are you okay?” Nicola asked.

Nicola followed Grace’s gaze. “You guys had sex, once, a couple years ago and he still gets under your skin? That must have been some night.”

Irritated, Grace turned to her friend. “We didn’t have sex. Why would you think we had sex?” She saw the surprise in Nicola’s eyes.

“Because you told me it was the hottest thing you’ve ever done with a guy.”

“Nope.” Grace closed her eyes for a moment, stomach tumbling. “All we did was kiss.”

“You just kissed.” Grace could tell Nicola didn’t believe her.

She nodded. “That would be correct.” What an understatement. Even now the thought of that kiss kick-started a throb between her legs and she groaned.

“Must have been some kiss.”

You have no idea.

“Please tell me you were at least naked or something.”

Nicola’s gaze settled back on Matt. “He’s not interested in the blonde.”

Startled, Grace jerked her head to the side and her insides twisted when her eyes slammed into Matt’s. He didn’t look away. Didn’t seem to care that she’d caught him staring at her. In fact a half smile curved his mouth even as he nodded down to the woman glued to his side.

“Hell yes he does.” Nicola ordered up another shot of tequila. “You’re an idiot if you don’t walk over there and do something about it.”

“He’s with a girl,” Grace retorted tearing her gaze from Matt.

“I will respectfully disagree. She might be standing beside him with her boobs stuck to the side of his chest, but trust me you’re the one who has his interest. He’s looking at you and he’s remembering the kissing. The fully clothed kissing.”

Grace shook her head but she didn’t get a chance to respond because Nicola shoved another tequila into her hands. She downed that shot too, not even tasting the stuff anymore.

“Doesn’t matter,” Grace eventually replied, once the fire had left her throat. “Because he’s not interested. Matt made it pretty clear that him and I would never be a thing.”

That was the frustrating part. “I don’t know, Nic. Let’s just forget it. The guy lives in Michigan anyway.”

“But he’s in Nashville right now and he’s leaving tomorrow.”

“What do you want me to do?” she snapped. “Walk up to him, push that set of boobs out of the way and stick my tongue down his throat?”

“That would be a good start.” Her friend wiggled her tongue suggestively. “Maybe this time you’d graduate to naked kissing.”

“And you need to get laid.”

Grace made a face. “Is that your answer for everything?”

Nicola’s eyes lit up and she giggled. “Damn right it is. Good sex can fix all kinds of problems.” She bit her lip and tilted her head suggestively. “I’m going to the washroom and then I’m going to’—she pointed toward the bar, at a tall man dressed in an expensive suit—‘buy that guy a drink. I don’t plan on going home alone tonight and neither should you.”

Nicola shrugged. “I wouldn’t say that.” She leaned forward and kissed Grace on the cheek before whispering. “He’s on his way over.”

Grace whirled around and sure enough, Matt Hawkins was pushing his way through the crowd. It wasn’t hard to spot him—he was at least six foot four.

Their eyes met above the crowd and she didn’t look away. Neither did he. By the time he got to her, Grace’s heart was beating so fast and hard she felt light headed. Her skin was damp and her hair stuck to her neck. The white linen dress she wore clung to her body and she tugged at the neckline, inhaling sharply when his dark gaze followed her fingers, lingering on her chest for a few seconds longer than was polite. She didn’t care. She liked it.

How the hell could one man do this to her?

Matt’s generous mouth curved upward, and with his hands loose at his side he smiled, his teeth flashing white in the dim room.

“I seem to have lost my date.”

Grace glanced behind him and spied the back of Candy’s head as she exited the bar with guy Matt had been talking to earlier.

“You don’t seem too broken up about it,” she said without thinking.

For that one moment everything but the two of them faded away. There was no music. No jostling patrons. No men trying to get her attention. There was nothing but Matt and his eyes. Eyes that were so intense she felt his gaze like a whisper against her skin.

Two years gone and it was still there.

It was a heavy moment and she knew he felt whatever this was between them. How could he not? It was hot and thick and full of something she was afraid to name. Was it just lust? Maybe. Or was it something more? Never before had she been this insanely attracted to a man.

At that moment Grace could have done one of two things. She could have said goodbye, have a nice life, and left the bar alone. Or she could have…

“Do you want to get out of here?” she asked, her voice husky and barely above a whisper.

She saw the hesitation. It was in the way his shoulders suddenly tensed. But she also saw the want. That fire was definitely in his eyes. Grace exhaled slowly and held out her hand. She watched his fist ball up into his side before he slowly released it.

A heartbeat passed. And then his long fingers slid over hers.