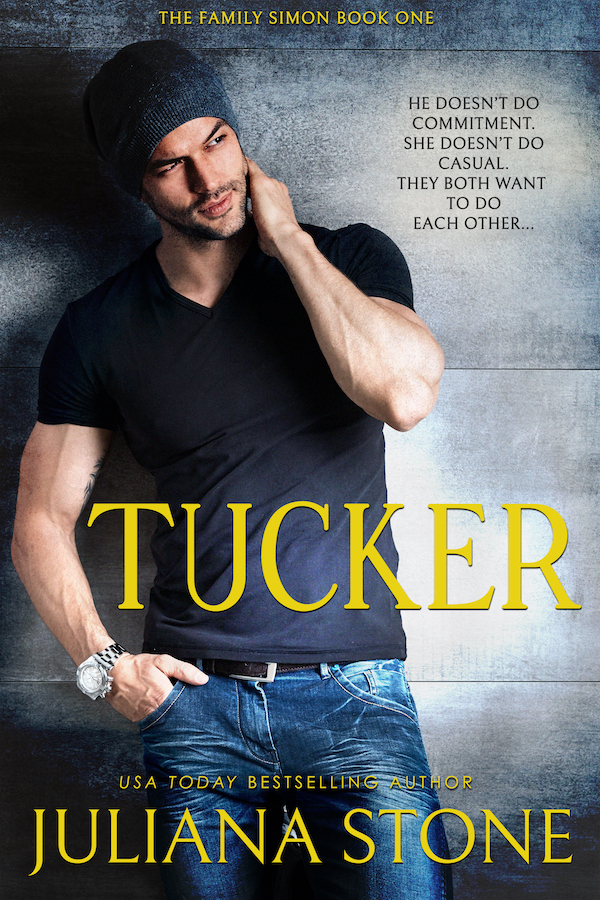 Book One: The Family Simon

Tucker tore off his tie and tossed it onto the sofa in the seating area. “Drink?” he asked casually, though inside a war raged. If she licked her bottom lip one more time he was going to go all caveman on her and carry her over to the bed. Or—he glanced at the wall to his right—he’d have her naked in less than five seconds.

“No,” she replied quickly. There went that bottom lip again.

“No.” Abby shook her head, those brown eyes glistening in the low light. Slowly she walked toward him, moving gracefully like a cat until she stopped a few inches away.

Suddenly on alert, Tucker couldn’t take his eyes off of her. Something had just changed, and he wasn’t even sure what it was, but this Abby was fierce. Sexy as hell.

And not to be messed with.

“I want you.” It was a whisper, but man, it hit him hard and he clenched his hands into fists.

God he wanted her so much that it hurt, but something twisted inside him. Guilt? Fear? Hell, he didn’t know what it was. The only thing that he did know was that this girl meant a lot to him. And it wasn’t as if the women he’d been with had meant nothing. He wasn’t that guy…that guy who didn’t give a shit. But those women were never going to figure into his life permanently, and they’d known that.

Sure they might have hoped, but he’d been upfront. He’d been honest. He’d given and taken and it had been returned in kind.

But this here…this night that was going to happen, it meant a lot more than just sex, and that was new territory for him. Abby wasn’t only a beautiful, smart, funny lady—she was his friend. He didn’t want to hurt her, because there were boundaries…boundaries he couldn’t cross.

Not yet. Maybe never.

“Abby.” He threaded his hand into that shiny, gorgeous hair and bent close. He needed to make sure that she knew what the score was. “Are you sure that this is what you want? You and me? Doing…”

Was that a smile?

His control was slipping. Christ, was it slipping. But he wouldn’t be the guy he was if he didn’t at least try once more to make her see. If he didn’t try to make Abby understand.

“But, this…whatever this is between us…I’ve told you things, Abby. Hell, you know more about what’s going on in my head these days than my brothers do. I’m no good for someone like you and I…”

Fuck. Was he even making sense?

Goddamn, but he was screwing this up. He released her and stepped back not even sure what the hell he was trying to say.

“Will you stop talking, Tucker?” she said, reaching behind her neck.

“I just,” he continued, running his fingers through his already mussed up hair, though now his eyes were riveted to the creamy skin on display as Abby slowly slid her dress down her body, over her hips until it was a mess of fabric at her feet.

“You’re not like the other women I’ve been with.” Jesus, she was standing in front of him in black panties and a matching bra. And holy hell, was that a tattoo peeking out the top of her skimpy undies?

His mouth was dry. He was pretty much done.

“I know,” she whispered taking a step toward him. She was so close now that her subtle, clean, fresh scent wafted up his nose and that set off a whole bunch of shit inside him.

Her hands were between her breasts…breasts that looked like they were a little more than a handful. Breasts that were soft-looking, so goddamn feminine. They were fucking perfect.

She toyed with the clasp and he heard her breathing change. “Stop being a choirboy, Tucker. It doesn’t suit you.”