A Little Bit Of Christmas- Excerpt 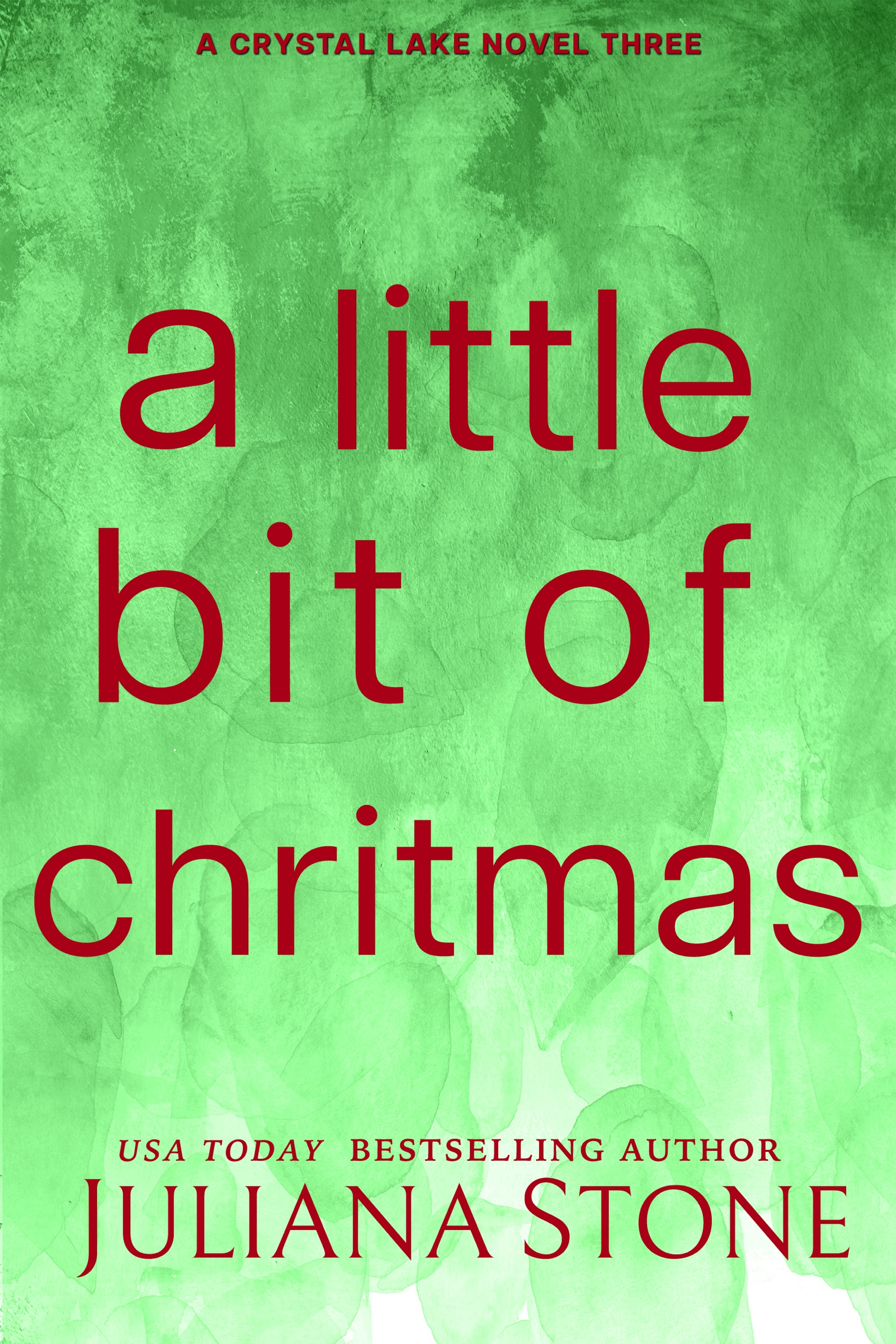 Chess Somers didn’t think her life could get any worse than it already was. She assumed that once you hit rock bottom the only direction left, was up. Over the last few months it was the one thought that kept her sane. The one thought that gave her hope.

It turned out she was wrong because things could be a hell of a lot worse.

It had nothing to do with the fact she’d been kicked out of a car about a mile from Crystal Lake in the middle of a snow squall, in heels no less, and everything to do with the rip down the front of her dress, the bruises on her swollen cheek and arms, not to mention the split lip, and fifty-dollar bill clutched in her frozen fingers.

She stared down at the bill and felt hot tears prick the corners of her eyes. Don’t cry, she thought. Don’t be that pathetic woman.

But she was pathetic. Who the hell was she kidding? And if she didn’t move her butt she’d freeze to death out here and no one would find her until the spring thaw. Teeth clattering like ice pellets against glass, she pulled her wool jacket tighter, and began to walk. Head down, she decided not to think about the biting cold, or the fact that she’d been out in the elements for less than five minutes and couldn’t feel her toes. One foot in front of the other. That’s all she needed to do for now.

And that’s what she did until she saw the lights of the motel slicing through the snow and darkness. She hit a patch of ice and went down on one knee, swearing and crying as she struggled to right herself.

By the time she reached the motel, her cheeks were streaked with tears and blood, some of it frozen and tight against her skin, and her knee throbbed something fierce. She limped forward, past the vehicles in the parking lot and the office where Jerry, the overly large, overly friendly, creep was on duty.

One step in front of the other. Keep going. You’ll make it.

Somewhere she heard music, the melody familiar though the song was just out of reach. She made her way across the parking lot to the other side and found herself humming the tune, smiling when she realized what it was—Rudolf the Red Nosed Reindeer. When she reached the door to the room she called home these days, it was still on her lips.

Chess shivered so violently she had a hard time grasping the door handle, but when she finally managed to hold on and turn it, the damn thing wouldn’t open. She yanked on it and swore, rattling it hard as a fresh batch of tears rolled down the already frozen river on her face.

Light fell from the window and she tried to peer inside, but the curtains were drawn nearly shut, only allowing a small sliver for the light to pass. Her mother was either passed out which meant she wouldn’t wake up until she was good and ready, or she’d gone somewhere to drink which meant Chess might not see her for days.

She’d left her clutch in the back seat of the damn car, and along with a tube of lip gloss and her cell phone, the key to her room. Chess rested her forehead against the door and tried to think. Just think. She needed to get inside and there had to be a way. Then it hit her, Jerry! He’d have another key.

She turned quickly, wincing at the fire that shot up from her toes, and kept her head down against the whistling wind as she headed for the office. The neon sign that flashed vacancies cast a dim shadow, and Chess pushed her way inside, grateful for the warmth that hit her. Tinsel was strung here and there with no rhyme or reason, while the saddest Christmas tree ever, leaned to the left beside the window. Presents sat underneath it, the dust on them so thick you could write your name, and the paper faded.

“Looks like the beauty queen had quite the night.”

Chess jerked up her head and spied Jerry sitting behind the desk, a half-eaten burger and fries on the counter. Grease dripped from the corner of his mouth and the smell was so strong it turned her stomach.

“I…” She had to take a moment and get her chaotic thoughts in order. It was hard though—she was so cold and in pain and confused and… Think.

She tugged the edges of her coat together, aware that Jerry’s eyes were on her nearly exposed breasts.

“I lost my key,” she managed to say coherently, a miracle considering the violent shivers that wracked her body.

“Did you now.” Jerry stood up and peered over his desk, a slow, malicious smile turning up the corners of his mouth.

Chess could only nod. The air changed, thick with something dark, as if all the light had left. Her body told her to flee, some primal instinct that shrieked inside like a banshee, but her feet felt as if they were stuck in cement. She had nothing left and whimpered like a hunted animal.

“Can I please have the spare?” She attempted a smile, but her face felt like it was about to shatter into a million pieces.

“Your mother asked for it last week.” His smile was bigger. Darker. Meaner.

Confused she could only look up at him. “Please, I just need a key or a master key to let me in.”

“You don’t remember me, do you?” His voice was flat and he leaned his palms on the counter, his expression ugly. “We went to high school together.”

She could only shake her head and mouthed, no, and wasn’t sure he heard.

“You were such a bitch. Wouldn’t give me the time of day. I was just the fat guy with bad skin.” He leaned closer. “Now I got you begging for a damn key to the motel room you call home.” He snorted. “Karma’s a bitch, ain’t she?”

“I guess,” she replied, her voice small and barely discernable.

“You guess?” He laughed and then stopped abruptly. His expression changed, it was subtle, but that damn internal instinct inside her exploded. She was in danger. Again.

“Tell you what,” he said, moving so that he could step around the counter until he was a few feet from her. “You do something for me and I’ll see if I can find another spare key.” His hands slowly went for the zipper on his jeans, and his dark smile made Chess nauseous. She took a step back.
“It’s cold out there.” His grin was nearly her undoing. “And you look like you’ve already been worked over real good.”

Jerry nodded toward the space behind the counter. “Guess you’ve got a choice to make.”

Chess blinked rapidly, trying like hell to banish the tears from her eyes, but it was no use. They fell unchecked, their sting hot on her face. She whirled around and pushed at the door, nearly falling on her butt because of the ice, but a strong arm grabbed at her and helped her up.

His voice startled her. It was deep and warm. Slowly Chess looked up into eyes so dark they appeared black. Eyes that slowly lowered and took in every inch of her. Ashamed and with fingers that shook, she grabbed for the edge of her coat and ran past him, not stopping until she reached her door yet again. This time she slammed her fist against it. Over and over, yelling at the top of her lungs for her mother to open up.

But there was no answer and when she finally stopped her fist was bloody, her voice long gone, and she wanted nothing more than to find a dark place, curl up and fall asleep. Chess rested her forehead against the door. The wind howled in her ear, the snow and ice slammed into her body, but she didn’t seem to feel it anymore. Somewhere she heard another Christmas song, one she knew, but the words were at the edge of her mind, close but not close enough. It made her think about years gone by. Christmas in the country with her grandparents. Christmas before her father left. Christmas from another lifetime.

The voice came at her from the dark and she blinked, turning her head to the right. A man stood there, keys jangling from his fingers.

Her throat was tight, her chest on fire, and she tried to speak. “No one here,” she croaked, her voice cut short by a sob. The world started to spin, the snow a brilliant white against all that darkness. Maybe if she just closed her eyes she’d wake up in the morning and find the entire night was nothing more than a bad dream.

Chess decided that was exactly what she’d do. She closed her eyes and let the spinning wash over her. The world tilted to the left and she let it. If not for the strong arms that grabbed her she would have fallen. They scooped her up and held her tight. A voice wrapped itself around her like a warm blanket and she snuggled inside, grateful to finally give in and disappear from a world that had turned on her.

“Are you an angel?” she murmured, eyes fluttering open. She couldn’t see a face because everything was in shadow. But his voice was clear and strong and it was the last thing she heard before everything faded away.

But that was all right. Chess didn’t believe in angels anymore.

Return to A Little Bit Of Christmas